WHAT IS A BAIL HEARING AND HOW DOES THE BAIL PROCESS WORK?

WHAT IS A BAIL HEARING AND HOW DOES THE BAIL PROCESS WORK? 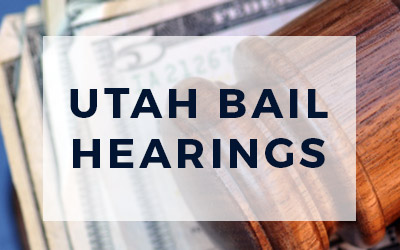 If you have been arrested and lodged in jail, a Bail Hearing can be set to determine what terms and conditions will be required for your release from custody as the case proceeds.  The issues of release from jail, or avoiding jail during the pendency of your case, can also be addressed at Arraignment in Justice Court (or the Initial Appearance in District Court), or even at a Bench Warrant Hearing in either court where there is an outstanding warrant for your arrest.

Factors the court considers in determining a bail amount, including the Uniform Fine/Bail Schedule

If the court finds probable cause to detain you and determines that you must post bail to “insure” or guarantee that you will appear at subsequent court hearings, the court must “immediately make a bail determination,” which must “coincide with the recommended bail amount in the Uniform Fine/Bail Schedule,” unless the court finds “substantial cause to deviate” from the schedule.  (The Uniform Fine/Bail Schedule is a detailed chart that lists preset bail levels for various crimes.)
However, the same degree of crime can result in different bail amounts based on whether your criminal history is rated as “poor” (high recidivism), “fair,” “moderate,” “good,” or “excellent” (clean criminal record).  In most cases, the judge will follow the bail schedule unless there are extenuating circumstances warranting a deviation from the normal guidelines.  Ultimately, the court must decide whether you pose a safety risk to self, alleged victims, or the community at large, or are a flight risk.

Article I, section 9, of the Utah Constitution and the Eighth Amendment to the United States Constitution prohibit the Court from imposing “excessive” bail amounts.  Bail is seldom denied and for most criminal offenses is a “matter of right.”  In order for the judge to deny bail, you must either be charged with aggravated murder — Utah’s only crime that is subject to capital punishment — or be charged with a felony and, e.g., be adjudged to be a flight risk.   Nevertheless, in many cases even Defendants who are charged with felonies can be granted bail.  Bail is not a means of punishing you, nor should there be a suggestion of revenue to the government.
There are at least three primary types of bonds:

Sometimes the court will order a “cash only” bond, which is, again, typically set at 10% of the total bail amount.  However, if defense counsel can persuade the court to reduce the bail to an amount that is not cost prohibitive, there is an incentive to pay a cash bail, as it is refundable to you upon resolution of the case assuming you have not violated any bail conditions.

You may also collateralize a bail amount set by the court by putting up the equity in property or a house equal to the face value of the bail amount (as determined by appraisal).  If you fail to appear for scheduled court dates, the court can enforce the lien and repossess the property or house.  This type of bond is less common.
Not all crimes warrant the need for a Bail Hearing before a judge.  Jail personnel often have a bail schedule that they refer to for minor offenses.  In these circumstances, jail officers can issue a standard bail amount and release you with little or no time in jail.

In certain scenarios, defense counsel can convince the court to allow you to avoid posting bail and, instead, arrange through Pre-Trial Services (PTS) to wear an electronic ankle bracelet monitor, e.g., GPS or a SCRAM (a secure, continuous, remote, ankle monitor).

Release on “Own Recognizance”

The most favorable option is release on “Own Recognizance” (OR), in which you promise to appear in court at all subsequent hearings without posting a bail bond or being supervised by PTS.  OR release is generally only granted in cases where you did not commit a violent crime and, e.g., are not classified as a flight risk.

Google Rating
4.9
Based on 74 reviews