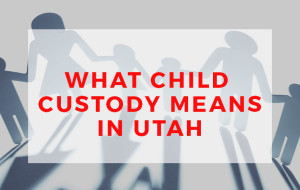 WHAT IS UTAH’S DEFINITION OF CUSTODY?

Custody of a minor child means the legal status awarded by a court to a parent for the maintenance, care and control of the child.

In Utah, a custody action may be filed in District Court as a case by itself, or brought as part of another legal action, such as a divorce, legal separation, protective order or a paternity matter. In child neglect, dependency or abuse cases, a custody order may be entered by a Juvenile Court.

There are two aspects of custody awards: (1) legal and (2) physical. Physical custody refers to where the child will reside or live. Legal custody means a parent’s rights, powers, privileges, and duties to make major decisions for the child- important decisions related to such matters as education, religion, medical treatment, or consent to get a tattoo, get married, or join the military before age 18.
Regardless of legal custody or allocation of decision-making authority, each parent may generally make decisions regarding the day-to-day care and control and emergency decisions regarding the health and safety of the child while the child is residing with that parent.

in this custody arrangement, both parents make important decisions about the children. The court may award exclusive authority to one parent to make certain decisions. In fact, any parental rights not specifically addressed in the order may be exercised by the parent who has physical custody of the child a majority of the time. The court may also designate one parent as the “primary caretaker.” Also, in this arrangement, the children have at least 111 overnights a year (i.e., more than 30% of the year) with each parent. While joint legal custody is not based on awarding equal or nearly equal overnights or access to the child, joint physical custody can mean 50/50 time, or nearly 50/50 time, as required to meet the best interest of the child. The court will often require that one home be designated as the “primary physical residence” (or “home base”).

WHAT IS THE ”BEST INTEREST” STANDARD IN UTAH?

The guiding principle in child custody decisions is the “best interest” of the child. In determining whether the best interest of a child will be served by ordering joint legal or joint physical custody, the court must consider various statutory factors, including:

Unlike many other states, in Utah, there is a “rebuttable presumption” that joint legal custody between both parents is in the child’s best interest. This presumption may be overcome by showing that there was:

Knowing what a judge considers relevant in determining child custody is critical in successfully negotiating a custody settlement or litigating the issue of custody, because judges have broad discretion to determine custody. Our custody attorney, Casey T. Hoyer, has the necessary experience and knowledge to effectively handle your custody matter.

Google Rating
4.9
Based on 85 reviews