HOW TO MODIFY CHILD CUSTODY IN UTAH

HOW TO MODIFY CHILD CUSTODY IN UTAH 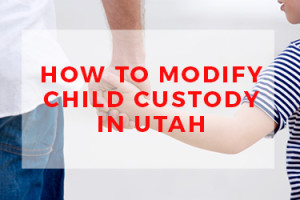 It is common knowledge that the only constant in life is change.  This applies as much to divorce decrees and orders as anything else in your life.  Your divorce decree may have satisfied all the requirements and needs of both parties and the children at the time it was signed by a judge, but there may be changes in circumstances that now make your divorce judgment a hindrance, rather than a tool, to navigate the difficult circumstances of divorced families.

Not all changes or disagreements need to be addressed and resolved in court.  In fact, it is usually cheaper and healthier for all parties involved to consider Alternative Dispute Resolution (ADR) processes to solve their current conflicts.   ADR refers to other ways of resolving conflict among parties, such as mediation and arbitration.  If you and your ex-spouse can resolve your issues in this way, then a petition to modify can be filed with a stipulation to change the divorce decree to the new, agreed upon terms.

If the parties had joint legal or physical custody, their divorce decree will most likely require them to try to resolve their conflict through mediation or arbitration first before they can bring their grievance to court.

However, ADR is not always the answer.  If you have been unable to reach a mutually beneficial agreement with your ex-spouse, it may be necessary to involve the courts.  To bring your case within the jurisdiction of the court, a “petitioner” must file a “Petition for Modification” with the court and “serve” it on the other party.  (Note: a petition to modify custody necessarily also means modifying “child support” and “parent-time” in the “Parenting Plan.”)  Then the “respondent” must file an “answer” with the court and serve it on the petitioner within a statutorily determined number of days (usually 21 days).  If respondent fails to answer the petition to modify, then petitioner will automatically prevail and may obtain a “default judgment.”

In considering a petition to modify, the court follows a two-part test.  The petitioner has the burden of establishing:

1) that a “material and substantial change in circumstance” has occurred since the most recent order, e.g., the divorce decree or a previous modification (the court will generally not look back earlier than that controlling order), and

2) that a change in custody is in the “best interest” of the child.

HAS THERE BEEN A MATERIAL AND SUBSTANTIAL CHANGE IN CIRCUMSTANCES?

Other examples of material and substantial change in circumstances include a remarriage or the need for a child to change schools.

IS A CUSTODY CHANGE IN THE BEST INTEREST OF THE CHILD

Now, the court will only consider if modification is in the best interest of the child if it first found that there was a material and substantial change in circumstances.  The court wants to ensure that a child has stability for its proper development.  It also wants to avoid “ping-pong” custody awards and harassment by petitioner.  Of course, in practice, evidence you have presented to show the court that a material and substantial change in circumstances has occurred is the very same evidence you need to show that a change in custody is in the child’s best interest.

In considering whether modification of custody is in the best interest of a child, the court takes into account several factors to determine proper “fit,” without reference to gender of the parent, including:

Divorces, child custody, child support, alimony, and all other issues involving family disputes can be highly emotional, and are often exacerbated by the complexities of the legal system.  A divorce and family law attorney can help you to reach objective decisions that are truly in the best interest of your child, and to navigate the complex legal system.

You can request a free child modification consultation with our office by calling (801) 901-0797, or by emailing us at manager@caseyhoyerlaw.com.

Google Rating
4.9
Based on 85 reviews