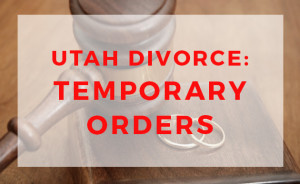 Why do I need a temporary order?

Divorces (or later modifications of divorces) can take a long time resolve! The state of Utah mandates a minimum 90-day waiting period until a divorce can be finalized by a judge, which can only be waived for “extraordinary circumstances.” Additionally, when divorces (or later modifications) are contested by the other party, they can take up to a year or longer to conclude.
Given the drawn out and lengthy nature of many divorces (or modifications), it is often necessary to seek temporary orders between the time of the Petition for Divorce and the final Divorce Decree (or between the time of the Petition to Modify and the modification). If you do not obtain temporary orders, you will have to wait until the divorce or modification is final to decide these matters.

Because all families are not made equal, there are a multitude of motions that can be filed with the court, and granted by a judge or commissioner. Some of the most common types of temporary orders include orders addressing: (1) child custody; (2) parent-time; (3) child support; (4) alimony or spousal support; (5) property division; (6) child care expenses; (7) health insurance; (8) payment of bills and debts; (9) attorney fees; etc. Note: except under limited circumstances, divorce orders relating to distribution of property cannot be reopened and modified post-divorce.
Because modifications of child custody and parent-time inherently influence child support, the Court will often order temporary modification of support as part of a temporary modification of custody or parent-time.
The Court can also issue temporary modification orders confirming changes made by the parties, provided that the modification is in the “best interest” of the child.

Also, the Court may order a temporary modification of custody or parent-time (and child support) in situations where a child is in “immediate and irreparable harm,” as long the modification serves the best interests of the child.

Responding to a Motion for Temporary Order

If you agree with the motions filed by the other party, then you would file what’s called a Stipulation with the Court. The Stipulation must be completed and signed by the other party.
However, if you disagree with any part of the motions, you must file a Statement Opposing the Motion for Temporary Order and supporting documents (e.g., Financial Declaration if money is involved, a Parenting Plan if children are involved, etc.).
Keep in mind that if you want one of the temporary orders mentioned above, and the other party did not raise this issue in their own initial Motion for Temporary Order, you must file your own motion asking for these things.

How do I obtain a temporary order?

When do temporary orders expire?